To provide a flavour of our school’s rich history please read about the personalities who have led Broomfield.  We are grateful to the staff and parents who collected so much of this information which complements our ever growing library of school photographs.

We hope it will be of interest to everyone, but especially that past pupils might find familiar faces amongst the pictures accompanying the stories of Broomfield’s colourful and inspiring Headteachers.

A history of Broomfield told through its Headteachers

Miss Mead founded Broomfield House School in 1876 and served as Headmistress until 1896. The first printed reference to the school was in the Richmond & Twickenham Times on 29th January 1876. The school offered tuition in English and maths, languages, music, art and PE (especially gymnastics).  Miss Mead gave us the school motto Lo Here is Fellowship.  Her contribution to the Kew community is recorded in a memorial tablet in St. Anne’s Church on Kew Green where we hold our annual Carol Service.  The tablet reads that it is a tribute to over fifty years of charitable and intellectual activities in Kew.  According to a former pupil, Miss Mead prided herself on being descended from Charles II, did her hair in the style of the period and wore long purple cloaks.

Formerly Headmistress of the Northampton High School.  She is described as “a much loved head” by a former Broomfield pupil of 1903.

E Collingwood was a pupil from 1899-1903 who recalls of Miss D’Esterre-Hughes that “she taught us elocution usually in the gym.  I can see her now almost shouting at us – half a league, half a league onward – and we all shouted back with great gusto!”

Beth Walker, a boarding student in 1918, recalls the school sports.  “We were taken to Richmond Baths for swimming and diving lessons and to the Old Deer Park for netball.  The two sides were called Spartans and Athenians and wore bright yellow or green arm bands.”

According to Joan Durrant, a pupil from 1923-29, “Miss Chettle and Miss Petch were joint Headmistresses when I was a student.  Miss Petch ran the Kindergarten in the gym for 5-7 year olds. Miss Chettle ran the senior half of the school for 12 years.”

Joan Durrant fills in some school history as she recalls: “Miss Petch left sometime between 1923 and 1925.  Miss Chettle continued but the school dwindled considerably.  Eventually she sold out in 1926 to Gunnersbury School for Boys. Gunnersbury put in two new joint Headmistresses, Miss Cross and Miss Wilde.” 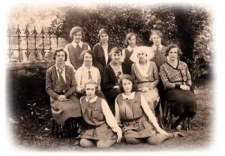 Joan Durrant tells us about these two new Heads of Broomfield,  “They bought the school up again and were very keen academically taking great trouble that pupils should pass into good senior schools”

As Gunnersbury School colours were red and grey, Broomfield adopted these as part of a new compulsory school uniform.

Joan Durrant tells us that, “Miss Wilde was an eccentric individual who tended to wear rather dramatic clothes and was decked out in her full array whenever possible.  She had a very memorable purple velvet dress and a striking orange one.  She liked bright colours and was altogether colourful character with great knowledge and the knack of imparting gems of information in such a way that her pupils never forgot them!”  Miss Wilde fell ill in 1935.

In her first Headmistress’ report at the school’s joint Speech Day with Gunnersbury at Chiswick Town Hall, Miss Palmer noted the successful entries by Broomfield girls to schools including St Pauls, Notting Hill and to Miss Cross’ Old Vicarage.

By 1939, Miss Palmer had taken over Broomfield as an independent school from Gunnersbury.  Speaking at the first Broomfield Speech Day in the school’s own hall Miss Palmer thanked parents for their support in this change of course:

“If Broomfield was to go to fresh success the time was right for the school to stand on its own feet and take its full position as an entity in her own parish and neighbourhood.”

Miss Palmer also announced her delight that Broomfield now had the country’s first air raid shelter in a private school, so the safety of the children was secured during the troubled times of the second world war.

The happy atmosphere of the school is remembered by Janet Somers, a pupil from 1938-47:
“I have many happy memories of the school in the war years, from sitting singing by the air-raid shelter on the lawn, to attending the summer holiday school sessions, organised at the time when holidays away in the country or by the sea, were then impossible for the children.”  After many years’ service, Miss Palmer died in 1952.  Her service to Kew and the school is commemorated by a plaque in St Anne’s Church, Kew Green, erected in 1954.

Miss Pamela Richards was interim Headmistress until the school was sold to Mrs Maude Rose in July 1954, who came to Broomfield from Ashton House School in Osterley.

Under Mrs Rose the school continued to flourish and also began welcoming children of families from around the world, something that has continued to the present day.  Mrs Rose notes in her 1956 speech day address that pupils had joined the school in that academic year from America, Australia, Canada, New Zealand, South Africa and Borneo.

Mrs Rose maintained the school’s balanced approach to educating the whole child.  At the 1961 speech day she confirms this: “If we measure our success by entrances into Public and Grammar schools we are successful.  However, I like to feel that we have helped personalities to develop, good habits to be formed with right relationships towards our fellows.” 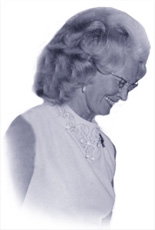 Mrs Irma York (later, Mrs Harrow), bought Broomfield House School in 1969, bringing a modern approach to the Broomfield tradition of academic success and personal development through arts and sports.  The school continued to flourish with boys and girls passing into all the leading schools in London and to boarding schools around the country at 8 and 11 years old.

Music and drama developed to a high standard with major productions each year, Easter instrumental music concerts and a traditional carol service at St Anne’s Church, Kew Green.  The school was regularly in the local newspapers for community and international activities.  The school adopted a boy in Kenya, sponsoring his education and was delighted to welcome Kenya’s High Commissioner to speech day in the early 1970s.  Broomfield celebrated its centenary on 30th January 1976, in the presence of Sir Anthony Royle, MP, the Mayor of Richmond and the High Commissioner of Kenya.

Amongst the local families since the 1970s who sent children to Broomfield were various actors and actresses including Hayley Mills, Honor Blackman, Martin Jarvis and Bond girl and old Broomfieldian Madeleine Smith.  Martin Jarvis produced a staff and friends production of a specially written play For the Sake of the School in which Mrs Harrow played the school’s founder, Miss Mead, and Madeleine Smith performed as leading lady.  Since then many notable local residents have been parents at the school from weather man Michael Fish to Olympic gold medallist Daley Thompson.

Broomfield’s proximity to the Royal Botanic Gardens afforded many practical opportunities for learning and for playing our part in welcoming numerous royal visitors including Princess Anne, the Queen and the Queen Mother.

In 1989 Mrs Harrow undertook a major project to build the gymnasium and two new classrooms.  This was followed in 1999 with a three storey block and double height atrium. These are now known as Harrow House in recognition of her headship.

After 32 happy years as Headmistress, Mrs Harrow retired in December 2001. Her career was celebrated with a Broomfield Ball at the Richmond Hill Hotel, which also marked the school’s 125th anniversary.  Soul superstar and family friend, Billy Ocean, came out retirement especially to sing for her. 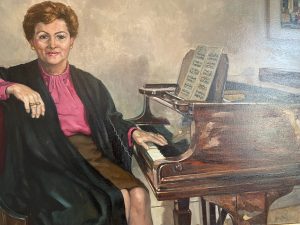 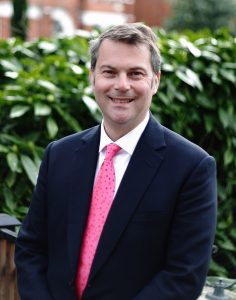 Mr Norton York took over from his mother, becoming Broomfield’s first Headmaster.  While retaining the family values and traditional academic strengths of an all-round education at Broomfield.  He came home to his old school after 8 years teaching at the University of Westminster where he founded the Commercial Music Department and was Chair of the Department of Music, Film and Fashion.  He has continued his association with the University and is a Visiting Professor at Westminster.  This close relationship led to the Broomfield Chamber Choir being invited to sing at Westminster Abbey as part of the University’s 175th birthday celebrations in January 2014.

Mr York modernised all the classrooms, created a new Science and Geography laboratory (the Green Room), set up successful Before and After School Clubs, and instituted a range of new initiatives in science, sport, and arts.  A partnership with the education and horticulture departments of the Royal Botanic Gardens, Kew enhanced the school’s science programme.

Since 2002 Broomfield’s facilities have expanded considerably.  A three storey annexe to the original Victorian building was built in 2004 to give Years 2, 3 and 6 spacious, modern classrooms, as well as new spaces for the ICT suite, a new junior art room, and an additional 3D studio for woodwork and ceramics.

A new school kitchen and dining room was built in 2004 (nominated for a RIBA award) which provides a wide variety of excellent freshly cooked lunches.  The kitchen and dining room sits within a newly laid and landscaped playground with lots of children’s games and play facilities, providing plenty of space to learn and exercise.

Mr York retired in 2019 to concentrate on another family business, Rockschool, delivering graded music examinations for popular music, which won the Queen’s Award for Enterprise in 2018.  He handed over the reins to Mrs Byers, who had been his Deputy since 2015 and ownership of the school passed to Dukes Education, under the guidance of its Founder, Aatif Hassan.

This website uses cookies to improve your experience while you navigate through the website. Out of these, the cookies that are categorized as necessary are stored on your browser as they are essential for the working of basic functionalities of the website. We also use third-party cookies that help us analyze and understand how you use this website. These cookies will be stored in your browser only with your consent. You also have the option to opt-out of these cookies. But opting out of some of these cookies may affect your browsing experience.
Necessary Always Enabled
Necessary cookies are absolutely essential for the website to function properly. These cookies ensure basic functionalities and security features of the website, anonymously.
Functional
Functional cookies help to perform certain functionalities like sharing the content of the website on social media platforms, collect feedbacks, and other third-party features.
Performance
Performance cookies are used to understand and analyze the key performance indexes of the website which helps in delivering a better user experience for the visitors.
Analytics
Analytical cookies are used to understand how visitors interact with the website. These cookies help provide information on metrics the number of visitors, bounce rate, traffic source, etc.
Advertisement
Advertisement cookies are used to provide visitors with relevant ads and marketing campaigns. These cookies track visitors across websites and collect information to provide customized ads.
Others
Other uncategorized cookies are those that are being analyzed and have not been classified into a category as yet.
SAVE & ACCEPT